In today’s most active battlefields across the modern world, one of the most common sights is the APC – armored personnel carrier These army vehicles are used mostly in the battle against terror organizations and in guerrilla warfare against militias. Confrontation zones in Africa and the Middle East hold many terror groups bent on destroying APCs. 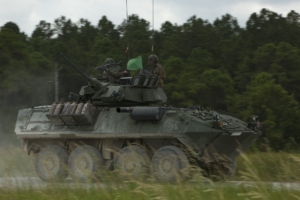 This type of fighting can also be called asymmetrical warfare, where the army of a particular official state fights a terror organization or group, in a hostile territory. As a company located in Israel, we are fully aware and experienced with such events, and  towards combatting these circumstances we have developed unique protection solutions.

In recent years, many documented reports of activity against APCs, particularly in active warzones such as Syria and Yemen, were recorded. It is clear that the main weapon used against APC’s are improvised explosive devices – IED’s. These devices are bombs with a detonating mechanism, constructed and deployed in ways other than in conventional military action, and in most cases used as roadside explosive devices. Armed groups and militias also use anti-tank missile.

Means of Protection for APCs

Mofet Etzion has developed the LIBA armor, which provides an additional and crucial layer of defense for army vehicles and APCs. Mofet Etzion has also developed armor that is capable of sustaining an IED blast, with minimum to almost no damage to the interior of the vehicle, leaving the total structural integrity completely intact.

Aside from Mofet Etzion’s developments and innovations regarding APCs protection, the Israeli defense industry has introduced other means of protection. The most notable being the Windbreaker system, which provides active protection for vehicles.

For more information, please leave your details below and we will get back to you shortly